What monitor does Tfue use?

Tfue uses a montior that runs competitive games like Fortnite Battle Royale at the best quality settings so he can compete against the top players in the game. Monitors are an essential piece of the puzzle when having the best hardware for playing competitive games because they can provide you with advantages over other players. There are many key factors to using a monitor, such as it's refresh rate, it's response time and resolution quality. Nowadays, 4K is the best resolution most games are hitting, but Full HD is still a worthy choice when playing a game like Fortnite. Tfue streams his gameplay on Twitch, so we've been able to see what kind of monitor this professional competitive player uses and now you can get the exact same setup.

Tfue has competed in some of the biggest Fortnite Tournaments that have ever been held, including the Fortnite World Cup finals held in New York City. Whilst he only placed 67th, he still ended up earning a cool $50,000 for his efforts. Being a competitive player means you need to practise and practise, but it also means you need to have the best hardware for competiting. Because if you don't, you're sure as hell your opponents will have it, which means you're already putting yourself at a disadvantage. For Montiors, there are lots of reasons to have the best of the best, including response time- which is how fast you monitor responds to the action, refresh rate for high FPS handling and resolution so you can see all the detail in the Fortnite map.

So what monitor does Tfue use? Tfue's monitor is... 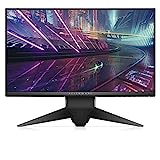 Tfue is using the Alienware AW2518H as his monitor, which comes in stunning full-HD resolution and a beautiful futuristic design that will make any battle station setup look awesome. It's has a 1ms response time for making sure you're always getting the action first, an amazing 240hz refresh rate to give that virtually no input lag. This monitor also works with NVIDIA G-SYNC technology, which aims to eliminates screen tearing and minimizes display stutter and input lag. Whilst Alienware sometimes can be pricey compared to other models, this monitor is quite competitive in terms of pricing.

This monitor is a 25-inch display so it doesn't take up too much desk space like the 27 inch models. The back panel has custom lighting options to help set the mood for your gaming room and it features a USB 3.0 port, Audio out and headphone jack slots for your other gaming gear. It has a brightness of 400 nits with an aspect of 16:9 ratio (standard for most monitors).

Got any suggestions for Monitors?

Have you used any good monitors and want to let us know about it? Let us know in the comments and we'll investigate!