What headphones does Shroud use?

Shroud is a popular Twitch Streamer who streams games such as CS:GO, Fortnite, World Of Warcraft Classic and more. His popularity has got everyone curious to what setup Shroud is using, including what type of Headphones he is using. A pair of headphones that are designed for gaming can offer many advantages than just using your monitor speakers or regular earphones. Most professional and competitive players will use gaming headphones and that is exactly what Shroud uses. Gaming Headphones have increased in features and functionality since the early days of gaming. Back when they became essential for game mechanics such as "sound-whoring", headphones now provide clearer and quality audio that allow you to be immersed in game and make sure you're not missing a beat. Being able to head your opponents is essential for competitive gaming- direction of sound gives you a vital clue in where your enemies are, where you are getting shot from and just generally help your ability to figure out what to do next. Many people overlook taking advantage of audio and how it can benefit them, so make sure you're not one of them!

Shroud has been in the competitive scene for many years and used to be a professional CS:GO player, winning tournaments that earned him hundreds of thousands of dollars. 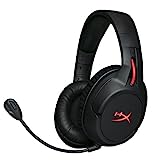 Shroud is currently using the HyperX Cloud Flight Wireless Gaming Headset and is often seen wearing it during his livestreams of Twitch.tv. The HyperX Cloud Flight headset offers wireless audio over a 2.4ghz connection and offers up to 30 hours battery charge. The headphones are adjustable and come with the HyperX comfort and sleek design that they are known for. These headphones work for both PC, PS4 and PS4 Pro. The microphone is detachable so that if you're not into speaking live, you can just remove it but it works great as a microphone for gaming sessions. The microphone also offers noise cancelling features to make your voice sound crisp and clear.

The HyperX Cloud Flight headset also offers onboard audio controls that allow you to control volume of both the microphone and in-game sound without the need for modifying settings. There are also many other models that offer other features but are more expensive than the HyperX Flight.

Shroud is a full-time streamer on the Twitch.tv platform. He is known as an ex-professional CS:GO player and is currently one of the most popular streamers on the planet. He streams a variety of game, including PUBG, CS:GO and more. His YouTube channel over 5 million subscribers and on Twitter he has 1.4 million followers.

Got any suggestions for a Gaming Headsets?

If you've got any suggestions for gaming headsets, let us know in the comments! If you've used the HyperX headset before, what are your thoughts on it?